Bugatti has unveiled the Bolide, an extreme, track-focused hypercar boasting an unprecedented weight-to-power ratio of only 0.67 kg per PS.

First things first: the Bugatti Bolide is an experimental study – for now, at least. The manufacturer developed it as an exercise to see what a radically light vehicle built around its iconic 8.0-liter W16 engine would look like. Or, as Bugatti CEO Stephan Winkelmann puts it, the Bolide has “solely four wheels, engine, gearbox, steering wheel and, as the only luxury, two seats.”

Envisioned as the ultimate Bugatti performance kick, the Bolide combines the Chiron-derived W16 power plant with a minimal body for maximum downforce. 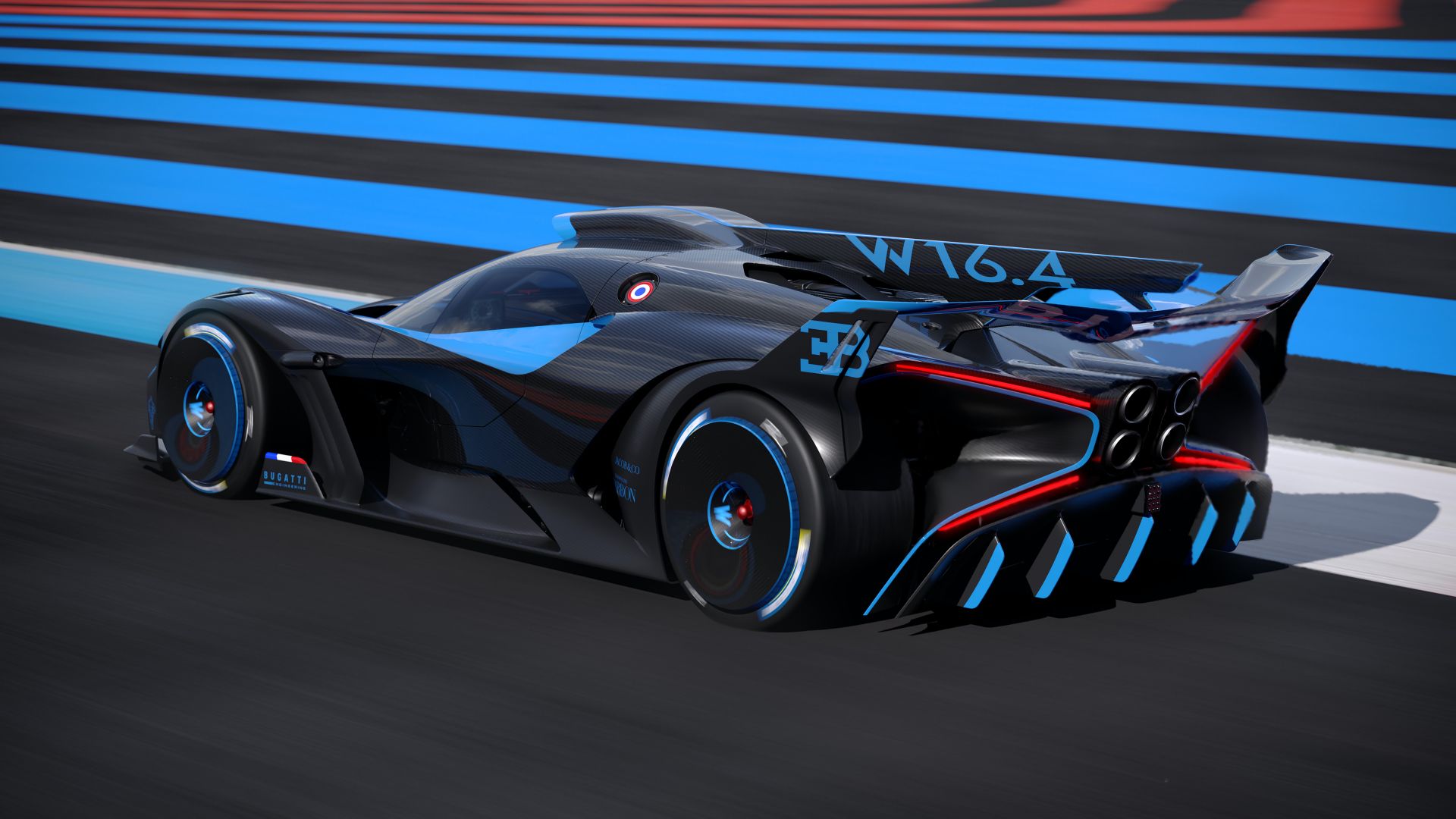 To make the Bolide this light, Bugatti used only titanium screw and fastening elements, 3D-printed aerospace titanium alloy thin-walled functional components, ceramic brakes and coatings and, of course, lots of carbon fiber for the monocoque and other components. Described as “the most extreme, uncompromising, fastest and lightest vehicle concept in the company’s recent history”, the Bugatti Bolide is theoretically capable of reaching a top speed well above 500 km/h (310 mph). 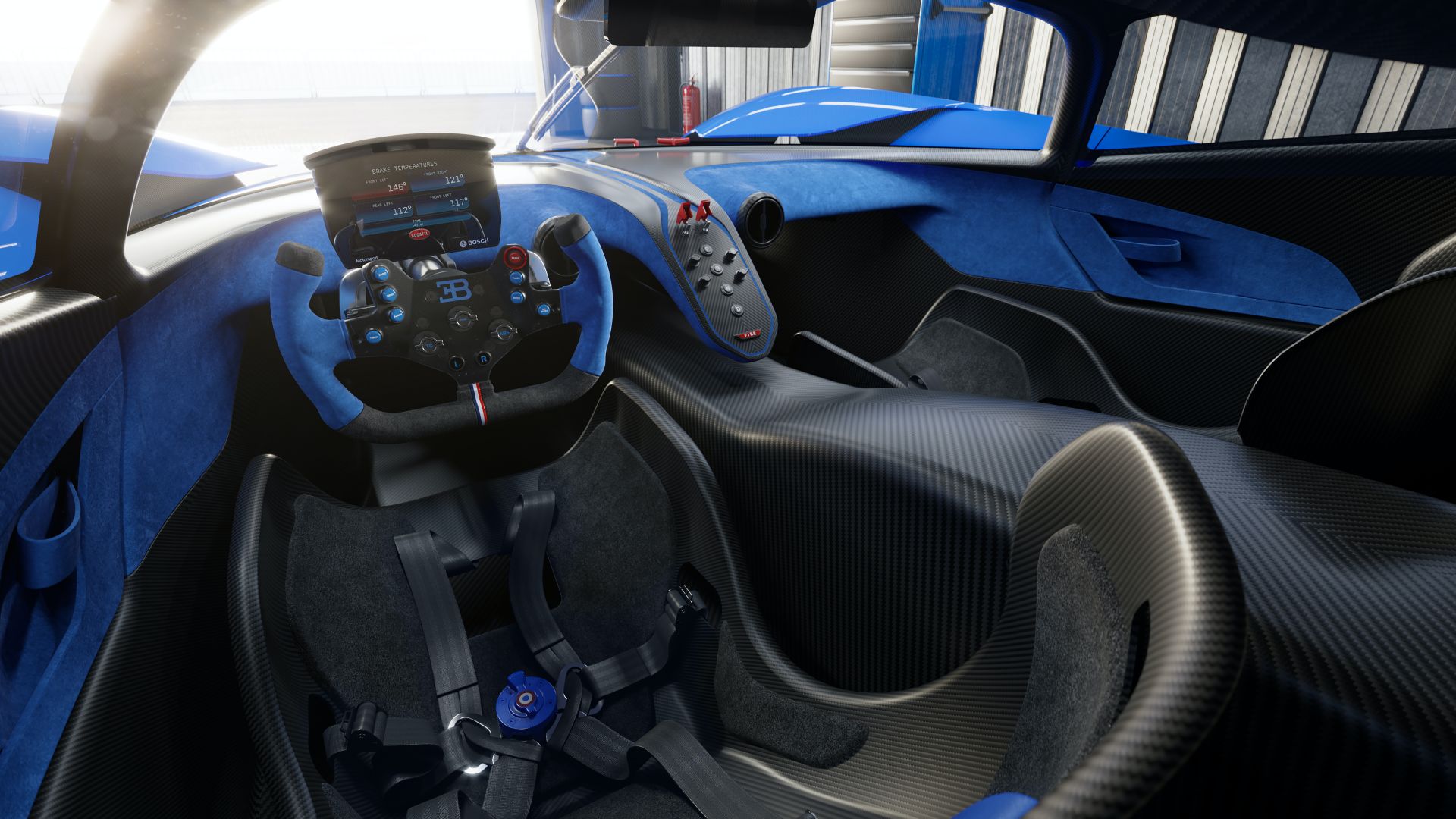 Helping it deliver these staggering lap times is the morphable outer skin of the intake scoop on the roof, which provides active airflow optimization. When driven at a slow speed, the surface of the scoop remains smooth. At high speeds, however, a field of bubbles bulges out, reducing the aerodynamic drag of the scoop by 10 percent and ensuring a 17 percent reduction in lift forces. In addition, the flow onto the rear wing is optimized. At 320 km/h (199 mph), the downforce reaches 1,800 kilograms (3,968 lbs) at the rear wing and 800 kg (1,764 lbs) at the front wing.

Mind you, the Bolide may be more than just an experiment, as Bugatti let it “slip” that it built it according to FIA’s safety requirements. It also looks a lot like an LMP1 endurance racer.

“The Bolide is the ultimate answer to the question of what if Bugatti built a track-focused hyper sports car that met the FIA’s safety requirements,” said Stefan Ellrott, member of the Board of Management of Bugatti and Head of Technical Development. “Designed around the W16 powertrain with the minimum body structure and unbelievable performance data. The result: the smallest possible shell for a breathtaking performance vehicle that allows the W16 to truly come into its own.”

Does this mean we are going to see the Bolide go into a limited series production? Bugatti says that has not been decided yet, but given the effort put into this prototype, we’d say the Bolide has a good chance of becoming the mother of all track-exclusive hypercars.

The Model Y was selling like hotcakes and might have even taken some sales from the Model 3.

Could The Mustang Mach-E GT Become An Audi RS6 Competitor?

The Mach-E makes a surprisingly good canyon carver. Surely the GT will be even better.

Don’t worry, it won’t be gone for long and you’ll likely still be able to get one even if it isn’t new-new.

After shouting at the bikers and apparently trying to hit some of them, the man was beaten.

FCA has also agreed to submit itself to an independent compliance monitor for three years.

The Bentley Bentayga EWB could be 9.8 inches longer than the standard model.

Some rallycross cars get to 60 mph in 1.9 seconds. Time to see if a heavily tuned M5 can compete.

Could The Mustang Mach-E GT Become An Audi RS6 Competitor?

Four Years Ago, VLF Made A Single Force 1 V10 Roadster Out Of A Viper And Now It’s For Sale

Cupra Formentor Wants To Prevent You From “Car Dooring” Cyclists