After a flurry of last minute leaks, Chevrolet has officially unveiled the 2020 Corvette Stingray.

One of this year’s most highly anticipated models, the 2020 C8 is a revelation as it’s the first Corvette to adopt a mid-engine design. This decision has been decades in the making and it’s the final realization of Zora Arkus-Duntov’s dream.

Looking pretty much as expected, the 2020 Corvette has an aggressive front fascia with a triangular insert that is flanked by large air intakes. A small spoiler resides below, while there’s a stylish hood and slender headlights above.

The sporty styling continues further back as the car has a rakish windscreen, aerodynamic side skirts and sculpted bodywork that channels air into two massive side scoops. Other notable features include a compact greenhouse, muscular rear fenders and a double bubble roof.

Continuing to the rear, there’s a ventilated engine cover with a glass window that provides a glimpse of the new V8 engine. Above the window is a camera which sends video into the cabin.

Out back, there’s a ventilated rear bumper and stylish taillights that feature angular accents. Other highlights include a compact spoiler, a minimalist diffuser and a four-tailpipe sports exhaust system.

Despite all the changes, engineers were able to keep the Corvette’s removable roof. It’s joined by a new front trunk, or frunk, which is large enough to hold an “airline-spec carry-on and a laptop bag.”

Since the Corvette sits so low to the ground, the model has been equipped with a front suspension lift system.  It increases the front ride height by 1.6 inches (40mm) in 2.8 seconds at speeds up to 24 mph (39 km/h).  Interestingly, the system can be automatically activated by the vehicle’s GPS coordinates. 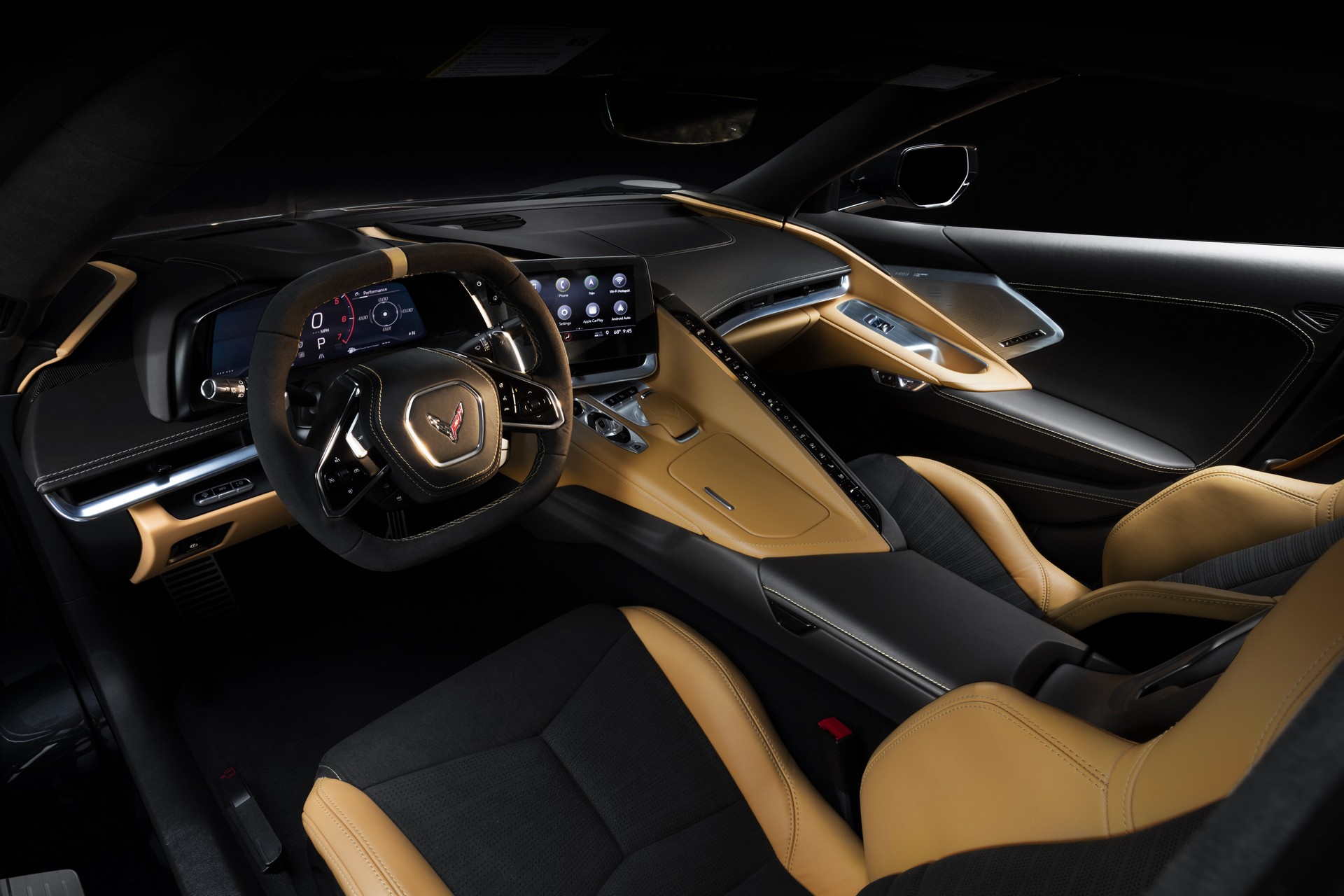 We exclusively revealed the Corvette’s interior back in January and the production model remains faithful to the prototypes.  Drivers sit behind a two spoke steering wheel with a squared off design that provides an unrestricted view of the 12-inch digital instrument cluster.  The steering wheel also sports a special Z button that allows owners to customize performance settings.

To the right of the steering wheel – or left in the new right-hand drive variant – is an improved infotainment system which is faster and easier to use.  Chevrolet didn’t say how big the screen is, but it features a higher resolution display.

Other highlights include carbon fiber or aluminum trim, voice recognition technology and a wireless smartphone charger.  Speaking of phones, the Corvette uses near field communications (NFC) technology for easy pairing. 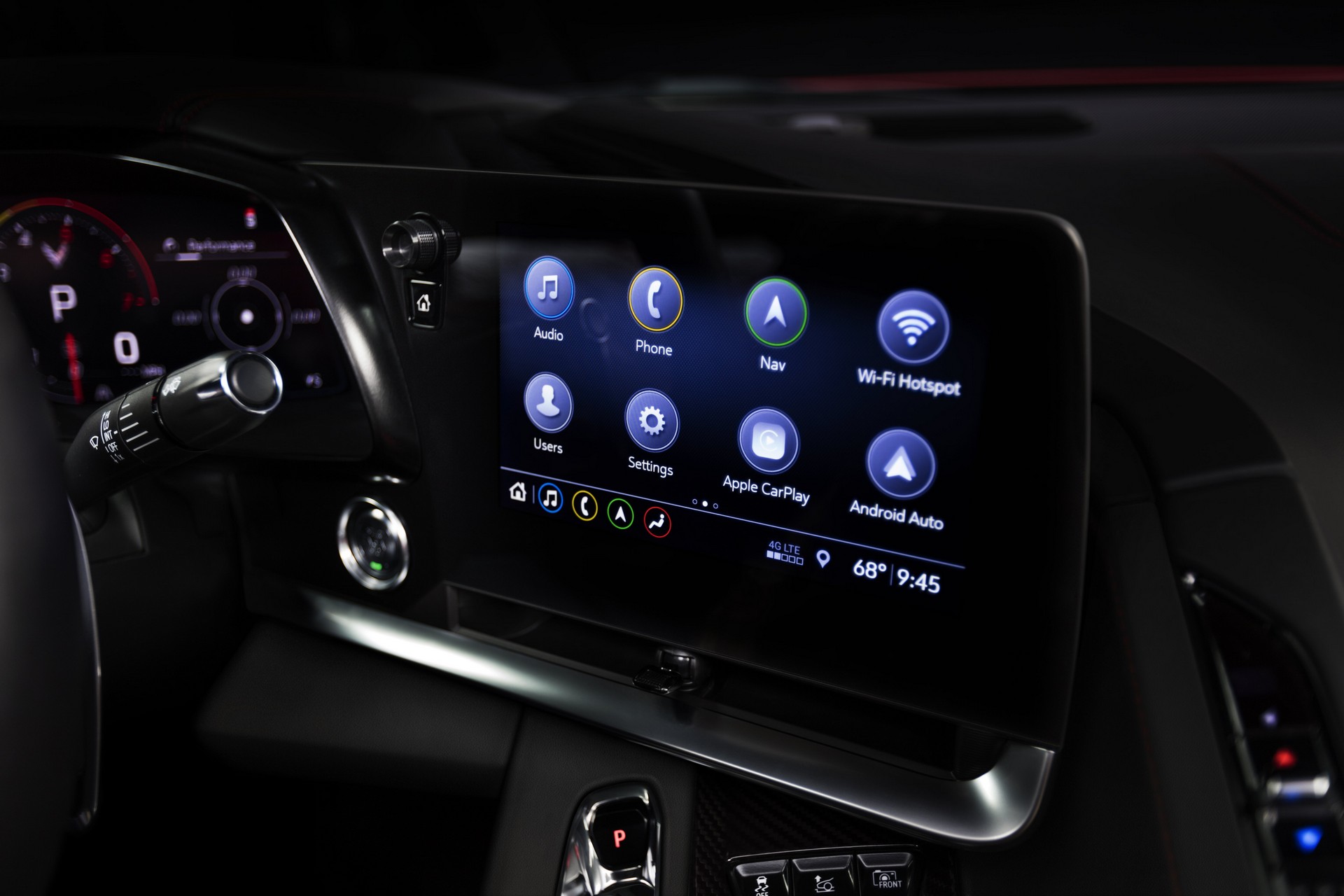 A ten-speaker Bose audio system is standard, but buyers can upgrade a 14-speaker system with stainless steel grilles. Other notable options include a new heated steering wheel, a driver and passenger seat memory system and an improved Performance Data Recorder.

The standard model comes with GT1 seats that have Mulan leather and promise to offer a balance between support and comfort.  The GT2 seats have a “racing-inspired look” as they feature Napa and Mulan leather as well as carbon fiber inserts.  The seats also have heating and ventilation as well as a black-painted back.  Lastly, the Competition Sport seats have Napa leather, aggressive bolsters and a “durable performance textile inspired by Kevlar vests.”  Like the GT2 seats, they also feature heating and ventilation as well as carbon fiber trim.

A New Engine, In A New Location

Unfortunately, the 2020 Corvette will no longer will be offered with a manual transmission.  Instead, an eight-speed dual-clutch automatic is standard and it sends power to the rear wheels.

While the Corvette eschews a carbon fiber monocoque, that doesn’t mean it’s a portly American.  Far from it actually as the model tips the scales at 3,366 lbs (1,530 kg).

In an effort to reduce weight, engineers used aluminum components and a new “carbon fiber curved rear bumper beam.” Furthermore, several components – including the dashboard and front / rear trunk tubs – were molded from an ultra-lightweight material which is derived from fiberglass and a proprietary resin.  Chevrolet says the material is so light that it can actually float on water.

Besides the weight saving measures, the model promises to be more dynamic than ever thanks to an improved suspension and an updated steering system with a ratio of 15.7:1.  The model also comes equipped with 19- and 20-inch wheels that are wrapped in Michelin Pilot Sport ALS tires.  They are backed up by a Brembo braking system with discs that measure 12.6 inches (321 mm) up front and 13.6 inches (339 mm) out back.

Of course, drivers looking to get the most out of the car will want to order the Z51 Performance Package.  It includes a sportier suspension, an upgraded cooling system and a high-performance exhaust.  There’s also a new axle ratio and gripper Michelin Pilot Sport 4S tires. Last but not least, the package adds Z51-branded brake calipers which grab onto larger discs that measure 13.3 inches (345 mm) front and 13.8 inches (350 mm) rear.

The 2020 Corvette Stingray will go into production late this year at the Bowling Green Assembly Plant in Kentucky.  Chevrolet will release additional information closer to launch, but the automaker confirmed pricing will start at less than $60,000.

The Across is the first new model to debut under the collaborative deal between Suzuki and Toyota.

Which Is The Better Off-Roader, The New Land Rover Defender Or The Old One?

The old Defender was very capable off road, so the new one faces stiff competition.

These Were The Fastest Cars At This Weekend’s Goodwood Speedweek

The Goodwood SpeedWeek included a handful of classic Formula 1 cars.

The BMW M3 and M4 look much better without the massive kidney grilles.

The SSC’s little brother is still some time away from becoming a reality.

Expect BMW’s X3 M LCI to launch about a year from now, at the earliest.

GM Produces The Most American-Made Cars, Aren’t You Proud?

Two independent studies show that GM builds the most models with the highest amount of U.S.-made components.

Mercedes was supposed to debut its EQ electric model line in the U.S. with the EQC crossover.

Dacia Hungary has revealed pricing for the new Spring Electric on its customer website.

These Were The Fastest Cars At This Weekend’s Goodwood Speedweek